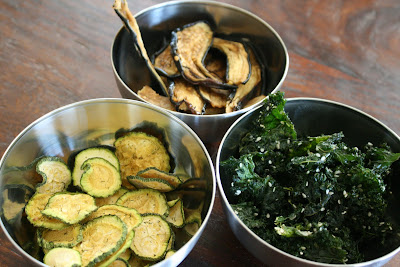 Our D has been working overtime lately.  Here we have sesame kale chips, salt and vinegar zucchini chips, and eggplant jerky.
Want to know more?  Ok.... 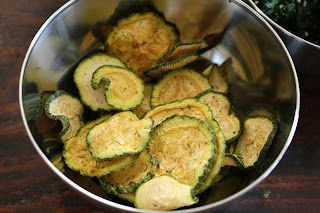 Zucchini Chips:
As part of our homeschooling (Mondays are baking/cooking/uncooking days) we made these zucchini chips.  I wanted salt and vinegar ones and the kids wanted cheezy ones.  So we made both! 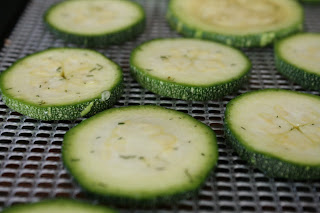 Salt and Vinegar Zucchini Chips:
Slice zucchinis into 1/4 in slices.  Add olive oil, apple cider vinegar, himalayan salt and fresh/dried dill.  Dehydrate at 115 for at least 12 hours, or until crispety-crunchety.  These were oh so good, I ate them all the next day (oops!). 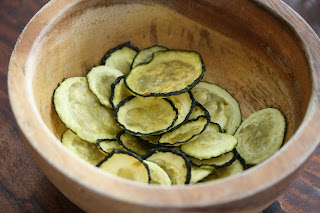 Smoked Cheeze Zucchini Chips:
Slice zucchinis into 1/4 in slices.  Add olive oil, nutritional yeast, fresh ground pepper, and smoked sea salt.  We use this one.  Dehydrate until crunchy, if you can wait that long.  The girls ate all of these, but they liked them chewy, less crispy.  But that's not chip-like children!!!  Oh well... :) 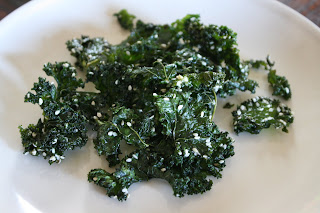 Sesame Kale Chips:
These were inspired by my friend Robin from Teeny Greenies.  I'm not sure exactly what she put in hers, but I massaged sesame oil, raw sesame seeds, bragg's liquid aminos, and a touch of agave into the kale and then dehydrated it for about 5-6 hours at 115.  I'm adding this to the "regulars" recipes.  Not as heavy as these other Sesame Kale Chips, less time consuming then these BBQ Kale Chips, but just as easy as making these Cheezy Kale Chips. 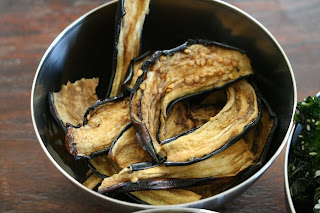 Eggplant Jerky:
I've been wanting to make "Eggplant Bacon" for a while now, but since I detest calling vegan/vegetarian food "meat" names...I call it Eggplant Jerky.  Yes, jerky is synonymous with meat...but I'm changing all that one post at a time, ok?
This is just Matthew Kenney's