Big Boy is my Grandmother's 60 year old Desert Tortoise that my mom brought home one day when she was in grade school. 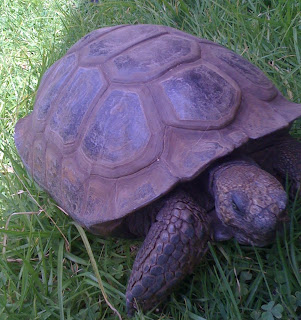 Excuse the iphone photo.  I blog a lot, but can't seem to remember to bring my camera anywhere!
He has happily lived there for over 45 years.  He burrows under a giant Bird of Paradise in the backyard, and comes out during the day like clockwork from 10am-4pm.  He munches on grass, dandelions and romaine lettuce.

We had to re-locate my grandmother from her home back in November while Big Boy was hibernating.  He usually comes out late February, so we've been anxiously awaiting signs that he had emerged.  I would go down to my grandmother's house every 2 weeks or so (it's 2 hours away) and put out lettuce, check under the bush and call "Big Boy".  My friend's laughed because every time we went down there I'd say we were going on a wild Tortoise chase. When April came around and we still had not seen him, we feared he'd hibernated his last winter!

No, indeed he had not!  Yesterday, when I turned the corner to go into the backyard, I saw Big Boy staring straight at me!  F was thrilled and ran right up to him.  E was a bit unsure, but picked up on all the excitement and started yelling "He's moving...he's moving!".  He looked just fine, and as happy as a torotoise could be, just sunning in the yard.  We picked him up (heavier than I imagined) and put him in a large cardboard box with a lot of dandelions and went to go tell Grandma the good news.  I did not want the lil bugger to go back under the Bird of Paradise!!

Lat year, when we knew Grandma could no longer take care of Big Boy, we asked her what she wanted to do with him.  She wanted to donate him to the Chula Vista Nature Center.  We already had everything set up so that he could be taken there when he came out of hibernation.  We called the Nature Center and let them know that we'd be bringing him in that afternoon.

Now, I'm not really a tortoise kind of girl, but it did make me a little sad that he would no longer be in the family.  I mean 45 years is a long time!!  However we knew he'd have an ideal situation at the Nature Center and they were super excited to have him.  They only have one other Desert Tortoise (a younger girl), they have their own enclosure, and they get to come in at night and sleep in the boss's office when it gets too chilly.

We've visited the Nature Center before and the girls really enjoy it, so now it will be a fun excursion every time we're in Chula Vista to go visit Big Boy.  Please go visit him when you're in the neighborhood too!!