Well Easter began at 5am when I snuck out to set some nuts to soak for the raw cheesecake I'd be making later.  I also had to check to make sure the Easter bunny had visited.
He had. 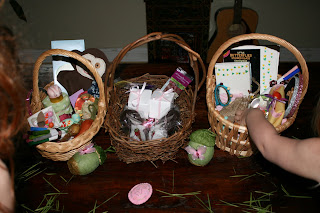 Cheeky bunny ate ALL the grass from the Easter baskets we'd sprouted!  Guess he gets hungry while hopping around the world.
When the girls woke up all we heard were pitter-patters around the house collecting the various eggs/treats the bunny had scattered.  Hushed whispers and giggles are so darn cute between a 4 year old and a 2 year old.

Papa and I rolled out of the warm bed and came to join the fun. I also wanted some pictures before everything scattered. How come the video camera is always out of batteries on holidays! Arrghh! 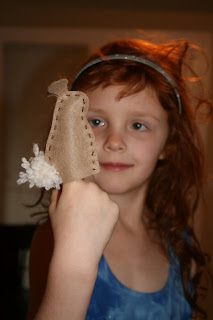 I think the Easter bunny slept in F's hair! 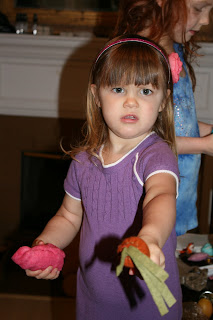 E wanted to know why the carrot wasn't real... 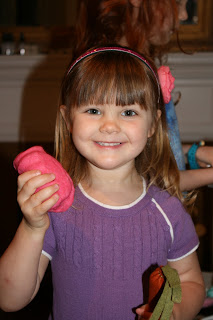 But she loved her pink glittery playdough! 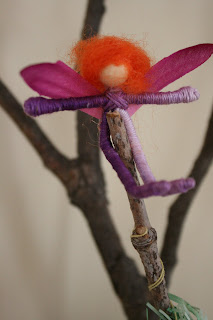 Hidden in the Easter tree... 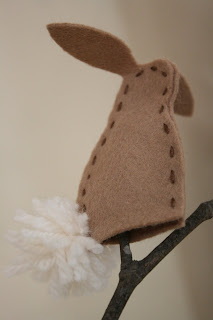 I assumed my usual position in the kitchen while the girls marveled at their treasures and began preparing the raw blueberry cheesecake we'd be bringing to the family potluck later that afternoon.  I was inspired by this recipe, but tweaked it a little.
My changes:
I used macadamia nuts instead of the brazil/almond mix for the crust.  I used agave instead of honey and I used 4 Tbs cocoa butter and only 3 Tbs coconut butter in the filling.  When I made the raw strawberry cream pie for my friends I really liked the idea of a layer of raw chocolate over the crust, so I used Rawmazing's recipe for chocolate sauce (the best I've found yet!) and layered that over the crust. 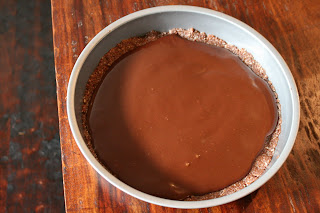 It was a hit!  The purple color of it was so hard to capture on film. 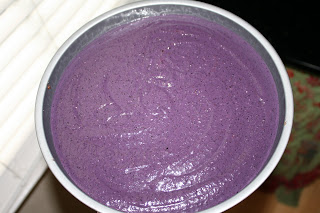 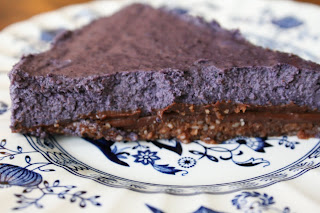 Then I made enough vegan mac and cheez to feed a small army. 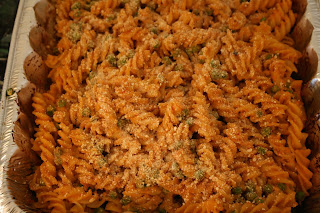 I normally just throw it all together using a  mixture of nutritional yeast, lemon juice and braggs, but I wanted something a bit different this time.  I used this recipe from Vegan Yum Yum.  It turned out really well. The non-veg family members didn't even know there was no "cheese" in it.  The tahini was confusing for them, they kept asking if there were nuts in it.  NO, it does not replace the old mac and cheese that grandma made, but it is a delicious creamy noodle dish that stands out on it's own and it does noy have the "nooch" taste that so many vegan mac and cheez's usually do.  I threw in peas for color and pop. 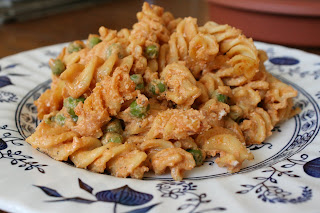 Before heading over to the in-laws, we stopped by a friend's house.  She hosted a lovely egg hunt for the kids. 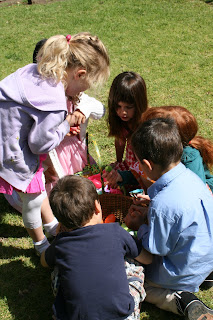 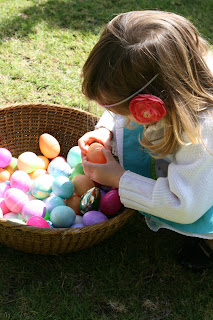 For this event we made a whole lot of fresh squeezed orange juice.  We used blood oranges, valencia oranges and tangerines.  We don't have an electric citrus juicer, so it took a bit of time, but fresh squeezed OJ is always worth it, right? 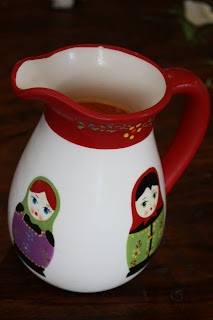 It was an Easter full of good food, friends, family and fun.

How do you celebrate Easter? 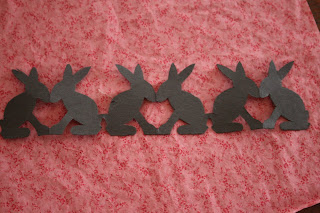